Free Delivery on all U.S. Orders $125.00 and Over- 2 year Warranty For Products Purchased On This Site

Archeologists have found a centuries-old shipwreck off Portugal's coast near Lisbon.

The ship was found just 40 feet (12 meters) below the surface.
"This is one of the most significant archaeological discoveries of the century," Cascais Mayor Carlos Carreiras said. "The recognition from the scientific community that this is the discovery of the decade, the century, in terms of marine archeology, is for us of great satisfaction." 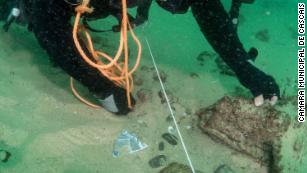 Divers found spices, ceramics and shells at the wreck.
Some objects were removed from the wreck for safekeeping, as they were at risk of permanently being lost.
Divers will continue exploring the wreck, and researchers will "have to complement the work in the field with research in our historical archives, to find out exactly which ship" this was, Freire said.
Full article here: